THE INTERROGATION AND INVESTIGATION

While you read the following below, keep in mind, allegedly Daniel raped and sexually assaulted 3 women on his last shift within a 6 hour time frame before being brought into interrogation.

So let me go over what you just read…

If Daniel allegedly raped and assaulted THREE women just hours before being interrogated by detectives do you think Daniel would have cooperated with the detectives immediately after they brought him into question?

Daniel cooperated 100% with the detectives. He repeatedly told them over the course of the 2-hour interrogation video the SAME EXACT story, NEVER once waivered.

During the interrogation the detectives asked Daniel if he was wearing the same uniform he had on from his last shift and he told them “Yes but not the same underwear” so they asked for him to take off his Pants and shirt, YET, NEVER asked for his underwear.

Ok, let’s play Devil’s advocate…
So do you think the detectives really believed he didn’t have the same underwear on?
Did the detectives really believe he was telling the truth about his underwear so they didn’t care to ask for them but didn’t believe him on anything else in the interrogation regarding the sexual assault?
Why didn’t they search his house?
Remember, Daniel signed his rights over during the interrogation for them to do so, so why did they not search his house for the underwear?
Why did they not go check his other underwear that were not even washed yet? Wouldn’t you want to investigate further and cover your basis?
DETECTIVES NEVER ONCE CHECKED HIS HOUSE!
If they believed Daniel was this “serial rapist”, why didn’t the detectives or the Police Department put undercover cameras and place audio recording devices into his vehicle and have detectives following him and catch him in action using an undercover Black Woman? 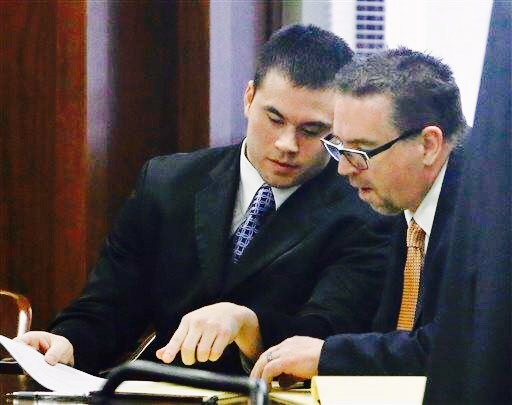 Transcript Vol. 18, page 4204 – 4205
Scott Adams: “And for whatever reason the Oklahoma City Police Department does not take his underwear, nor do they issue a search warrant for his house, nor do they issue a search warrant for his personal vehicle. […] nor do they issue a search warrant or ask consent to search his telephone. None of it.”
Daniel had a serious girlfriend of almost 5 years, in which 3 of the 5 years they were together while they attended college in Michigan and once he decided to move to Oklahoma City to pursue being a police officer, they moved down to Oklahoma City. She was with Daniel 2 of the 3 years Daniel while he was a police officer. Why did they not ever question her since she was with him 2 of the 3 years he was on patrol? Wouldn’t she have been a great person to question to ask of any odd behavior?
While Daniel was being interrogated, Detective Kim Davis called Daniel’s girlfriend at the time and had a less than 5 minute phone conversation regarding Daniel.
In fact, that ONE phone conversation was the only communication the detectives ever had with Daniel’s girlfriend. Why did they not question her other than that one time to ask her for any questions regarding Daniel, his behavior or their relationship?
I still remain in close contact with both of them and still to this very day they both believe in Daniel’s innocence.
Why did they not question any other race? If the theory stands that Daniel “targeted” women with Drugs, Prostitution and Arrest History because no one would believe someone with their past, then why did the Lieutenant profile Daniel and the detectives only question Black women?
THE ACCUSATIONS
Keep in mind, Only ONE Accuser came forward.
Then the detectives made up a victim profile out of thin air (African American women with warrants or histories of drug use and prostitution) and then hunted for women to fit that profile. Police detectives lied to most of these women by telling them that police had received a “tip” that they had been sexually assaulted by a police officer. 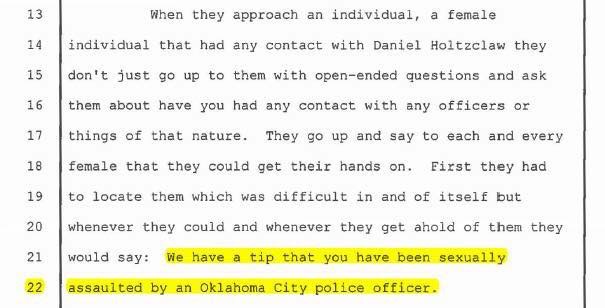 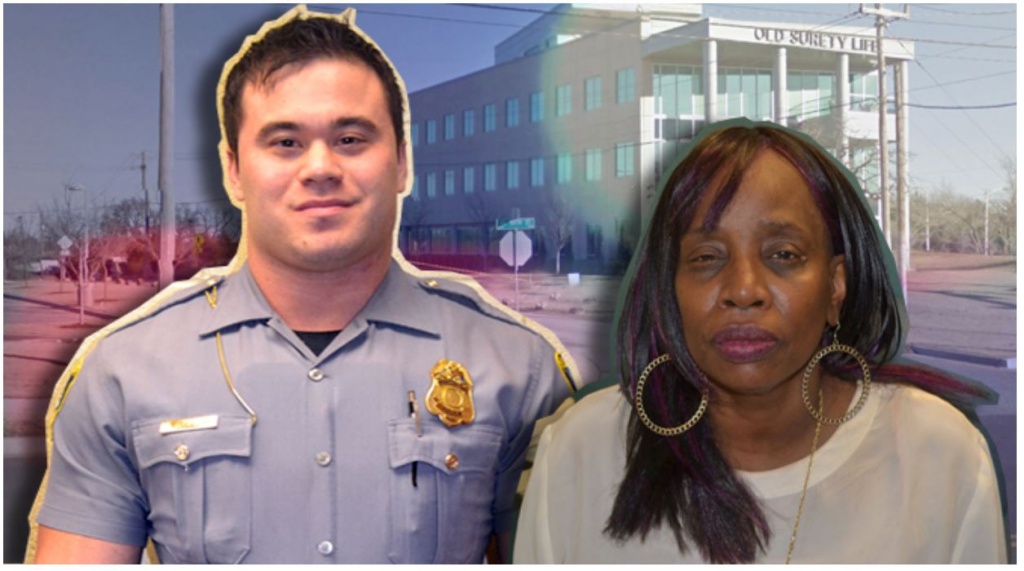 Jannie Ligons’ went to the Emergency Room after reporting the assault and the SANE test (rape exam) came back negative, and there were no fingerprints or DNA on the patrol car to corroborate her allegations that she and Daniel put their hands on the hood and top of the car.
A TOTAL OF 21 FEMALES AND 1 MALE CLAIMED DANIEL SEXUALLY ASSAULTED THEM. 13 OF THE 22 ALLEGATIONS MADE IT TO TRIAL. 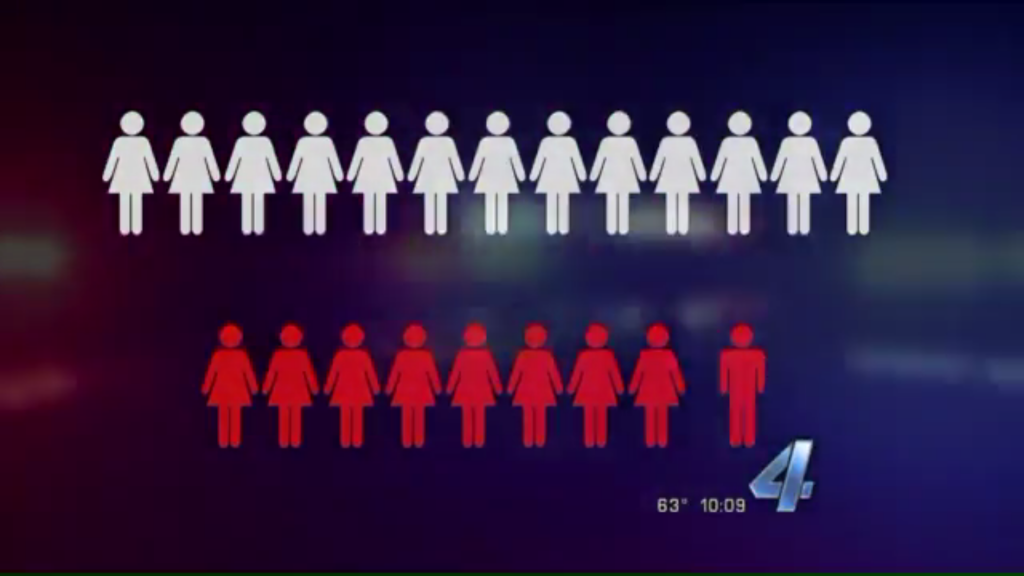 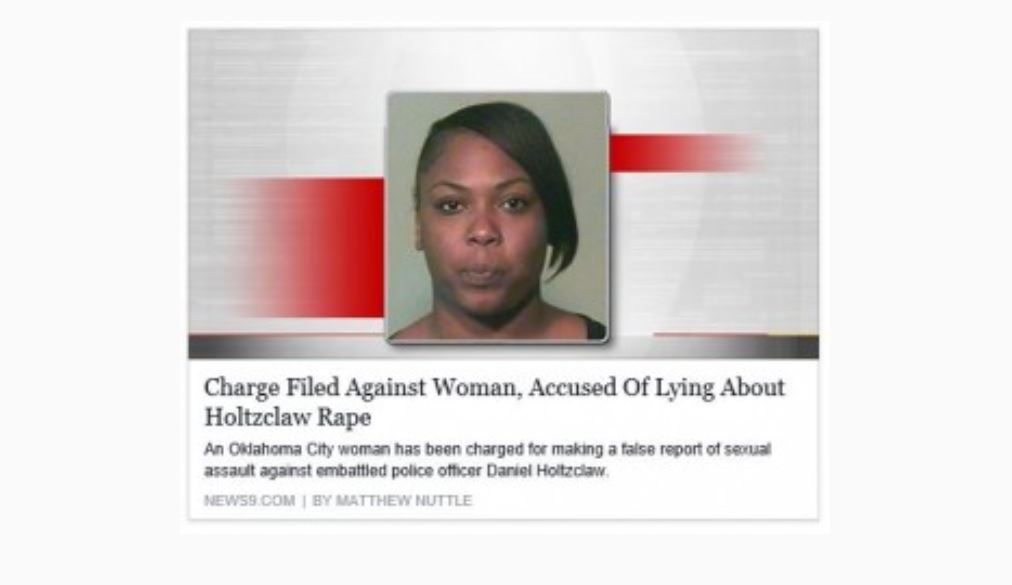 ONE OF THE MANY FALSE ALLEGATIONS AGAINST DANIEL HOLTZCLAW

WE WERE ABLE TO PROVE IN FACT 5 ACCUSERS KNOW EACH OTHER; ONE EVEN ADMITTED DURING TRIAL SHE WAS THE “HOUSE CLEANER” OF THE OTHER ACCUSER 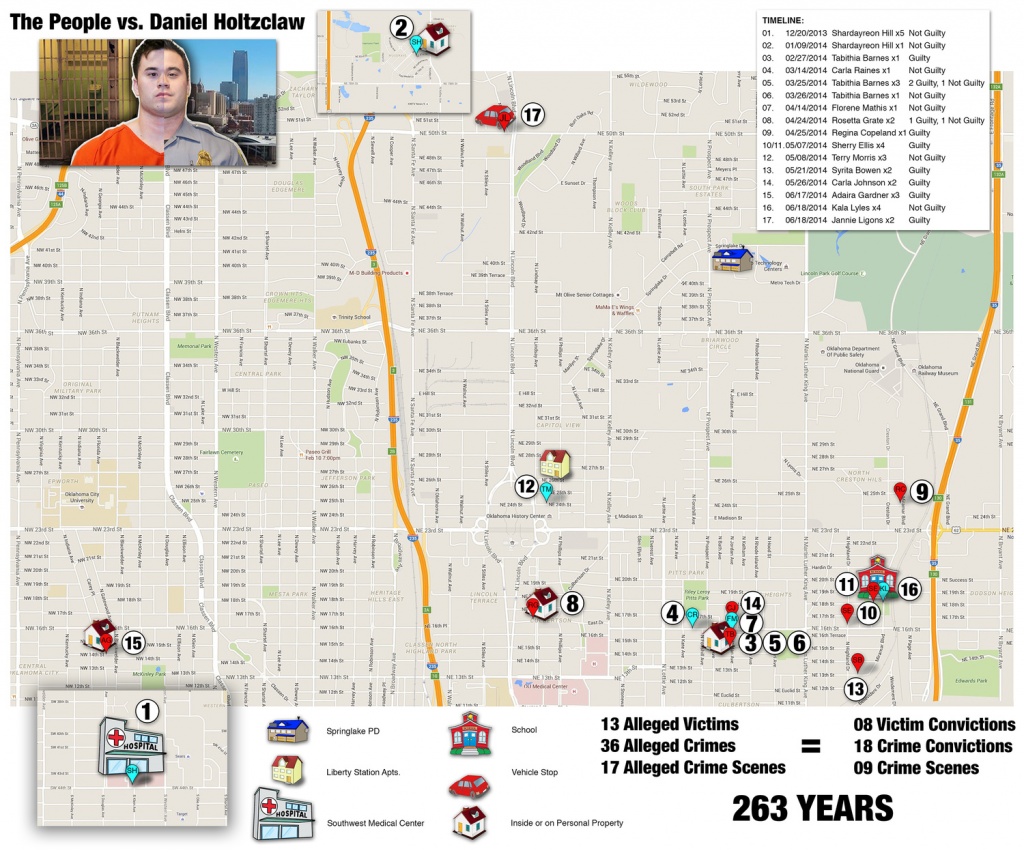 I cannot stress this enough, GPS DOES NOT MEAN A SEXUAL ASSAULT HAPPENED

Why do I say that GPS does not mean a sexual assault happened? GPS only confirms someone’s location or route. GPS does not confirm that a sexual assault happened. Daniel never once denied having contact with any of the accusers. He did call in and identified the women he stopped and checked their background for warrants. This was the area he patrolled. He didn’t choose this specific area to patrol. The prosecutors/detectives used “GPS” as their ONLY evidence that a sexual assault occurred. What is going to prevent that from happening to another officer that is accused of sexual assault?
Click to read more: Daniel Holtzclaw’s Patrol Car GPS (AVL)
Patrol car GPS failed to match some of the accusers’ allegations (Sherry Ellis, Regina Copeland, Terri Morris). Even though patrol car GPS doesn’t prove a crime occurred when it matches the allegations of someone who is stopped by police, it is important to note that GPS is proof of innocence when accusers claim events that are disproved by the GPS. 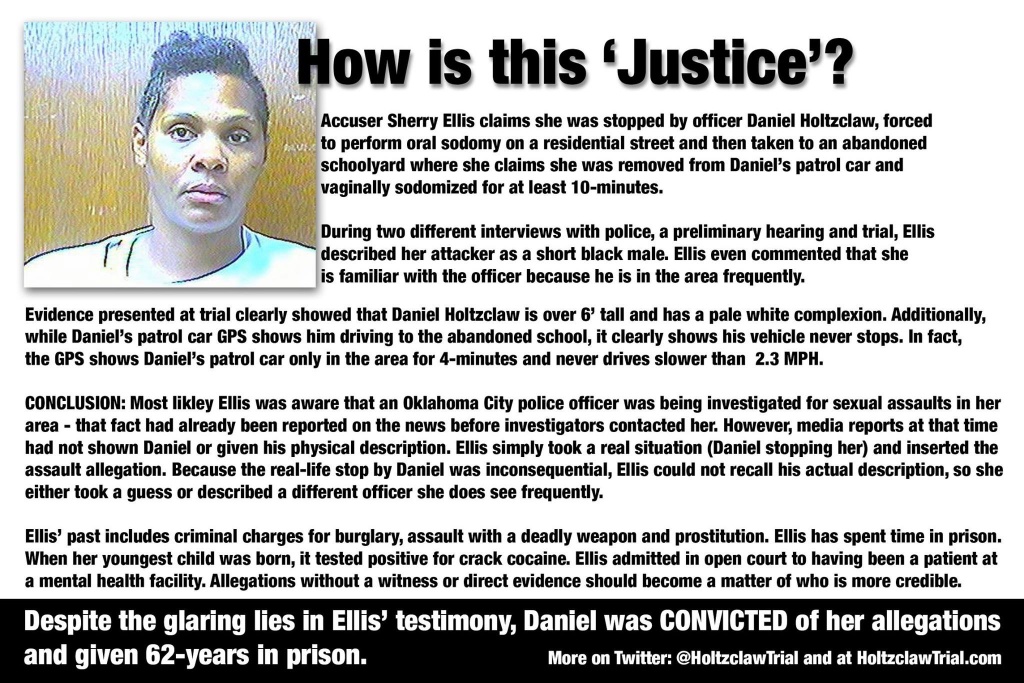 NOT ONLY DID SHE CLAIM THE OFFICER THAT RAPED HER WAS A SHORT BLACK MALE; THE GPS DOES NOT MATCH HER TESTIMONY YET DANIEL RECEIVED 62 YEARS!!!!

THE DNA
The DNA evidence was consistent with non-intimate DNA indirect transfer of the teenager’s epithelial (skin) cell DNA from her purse or from a pat-search to Daniel’s hands, then to the fly of his uniform pants while he used the restroom. 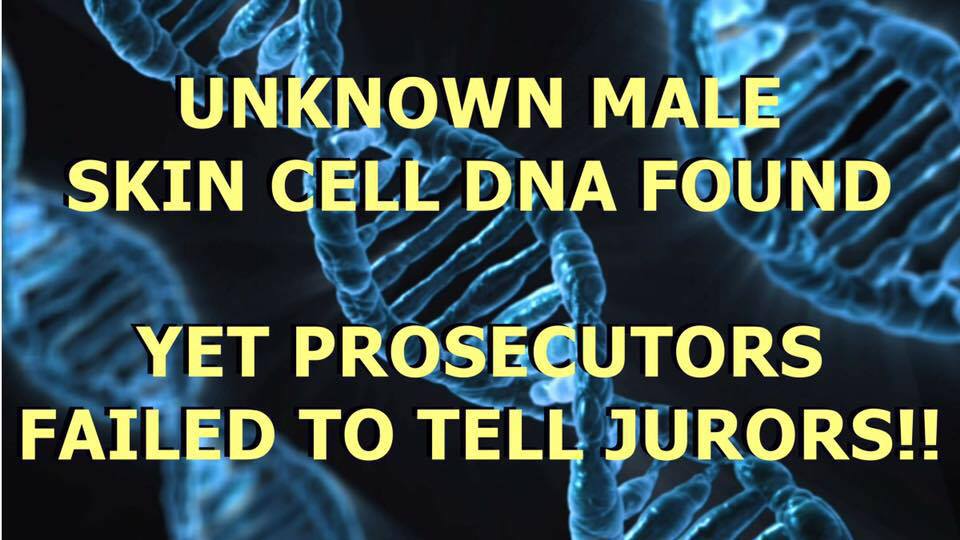 WHAT PROSECUTORS FAILED TO TELL JURORS:
“8. Additionally, we have identified a specific need to have the DNA evidence in this case subjected to review and potential additional testing by our own experts. While trial counsel effectively cross-examined the State’s expert as to the nature of the DNA evidence and how it was deposited on Officer Holtzclaw’s pants, it appears that he missed significant issues with the State’s conclusions and failed to do any additional testing that could have refuted those conclusions. More specifically, during closing argument, the prosecutor argued that the DNA evidence came from vaginal cells transferred via vaginal fluid onto Appellant’s pants, even though the State’s expert could only conclude that the DNA involved skin cells and admitted that no testing was done to verify the presence of vaginal fluid on the pants. Further, in two areas that were tested, the DNA was a mixture of at least three different people, at least one of whom was an unknown male, not Appellant. The significance of this information seems to have been lost on the parties below. Accordingly, it is vital that we consult our own experts to explain the significance of the evidence in this case, as well as to do additional testing on the pants.”

While the prosecution tried to ignore it, epithelial cell DNA from at least one unknown male was found on the fly of Daniel’s uniform pants. That male skin cell DNA obviously did not transfer in his vaginal fluid, so the male skin cell DNA shows that finding a female’s DNA does not mean it transferred in vaginal fluid either.
No visible stains or deposits were observed on the fly of Daniel’s uniform pants even though Daniel allegedly raped two women for a total of 30 minutes through the unzipped fly of his buckled pants less than 24 hours before the pants were confiscated as evidence. The forensic analyst used a bright light and a magnifying glass, but still didn’t see anything suspicious on the fly of the uniform pants. 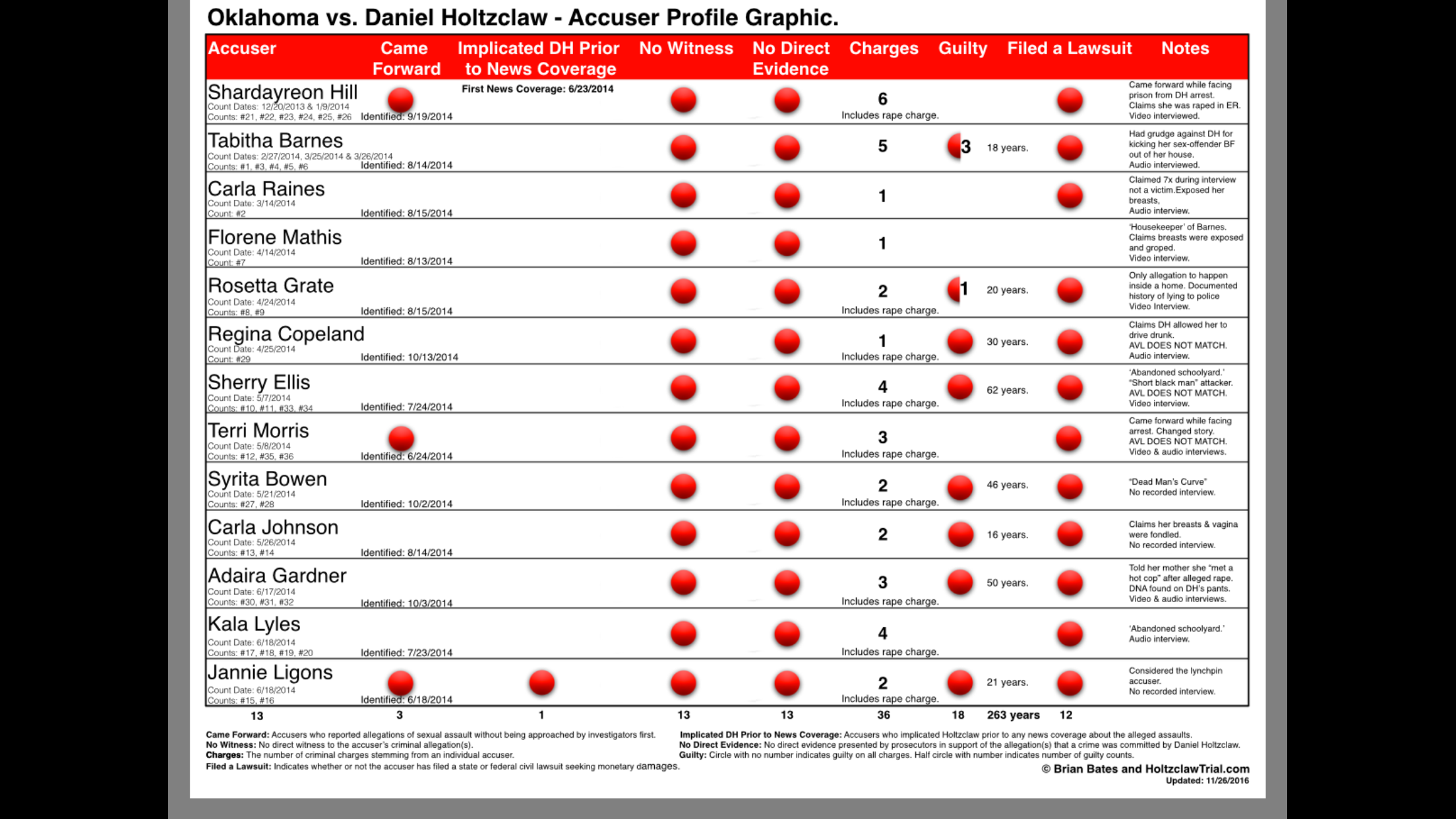 #1 SOURCE FOR THE TRUTH ON THE HOLTZCLAW CASE